If you are planning to visit in Baroda and confused where to go, then this article is for you. In this article, we have gathered a list for you of Famous Places in Baroda.

Baroda is located in the heart of Gujarat – the Cultural Capital of India, the place that accommodates many ancient temples. The city has a population of almost 2 million with lots of colleges and large industries. The city is known for its beautiful landscapes and business centres. Baroda is a fast developing city and has a lot more to offer by way of attractions and its cultural heritage.

Famous Places in Baroda For Visit are:

This is a beautiful palace in Baroda, Gujarat. It was built in 1875 and it became the residence of the rulers of Baroda State from 1878 till 1947. It has lavish décor and it is a great tourist attraction.

Situated at the city centre of Baroda, this is a beautiful garden that was created in the year 1887. It also has a large pond and “romantic” pathways along it.

This is a museum that was at first a British Residency and later a school. Now it houses various artefacts and it is situated in the heart of Baroda. It also has an art gallery that showcases paintings and sculptures.

This is a garden situated in Nadiad. It is about an hour’s drive from Baroda. It has a waterfall that tourists love to visit. Also there are boating facilities over here and regular music and dance programmes.

This is a museum that houses fine arts and artefacts. It was established in the year 1875, since then it has been enriched with many more artefacts. It is set amidst a beautiful garden, which adds to its attraction.

This is a lake in Baroda that has some ruins of temples and a mosque and tombs on its banks. It was built by Maharaja Suraj Mal. There are a lot of temples near this place that have old images of Shiva, Vishnu, Surya and Brahma, but no archaeological study could establish the period to which these temples belong to.

This temple is a must visit while touring to Baroda. It is a beautiful temple built in the Hindu religious style and it has idols of Swaminarayan. The architecture of the place is very artistic and the exterior of the temple is embellished with sculptures and columns.

This is a planetarium and it is also a great attraction for visitors to the city. It was inaugurated in 1995 and it has crystal clear images. There are several telescopes, magic lanterns and wildlife projectors for those who love seeing stars.

This is one of the most famous golf clubs in India. The club has a 9-hole course and it hosts a lot of tournaments that attract a lot of tourists. There are also lots of facilities for visitors to the club, like restaurants and shops.

This is a fun place to visit in Baroda, with lots of rides and games. It has rides like roller-coasters and slides. There are also aquariums where visitors can see several species of fishes and they can even touch them.

This is a sanctuary located in the South West region of Baroda. It spreads over 100 square kilometres and it houses birds like storks, eagles, pigeons, herons and peacocks. There are also many wild animals that reside here like deer, sambhar and nilgai. It is a beautiful place to visit and enjoy nature.

This is a Hindu temple that was built in the year 2000. It was constructed by the BAPS Swaminarayan Sanstha. The architecture of the temple is very impressive, with tridents and many pillars. The temple has a massive idol of Swaminarayan that can be seen from far distance. This place is very suitable for meditation as it is serene and tranquil.

This is another fun place to visit in Baroda. It has lots of rides and a big water park with several slides. There are pools and a lot of rides that anyone can do.

This is a Muslim tomb located at the Kheda district in Baroda. It was built in the year 1710 by Ahmed Shah I. It is a beautiful piece of architecture and has four tombs inside it. The mosque that is attached to it has beautiful carvings on the central dome and pillars.

This is a canal that runs through the city of Baroda. The construction of the canal began in 1950, it was completed in 1956 and since then it has been used for irrigation. It has 28 main gates that were constructed by the state government. This is a beautiful place to visit and enjoy an evening walk or ride. It also provides great photographic opportunities with its natural beauty and greenery.

This is a place that was established by the great Indian poet and nationalist, Sri Aurobindo. It is located at Baroda and it hosts many activities and programs to help the development of the place. The ashram has a beautiful library, art gallery and science centre. The place also hosts many cultural programs for the youth.

I think, you will be satisfied with the above information of Famous Places in Baroda. Those are some very beautiful and Famous Tourist Places in Baroda. Hope you like this article and share with your loved ones and If you have wanderlust and live to explore, then you can read about  many other places  on Travel Tricky 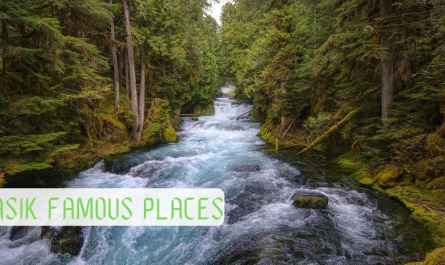 The Best Time To Visit Kashmir: A Guide To The Best Seasons

The Best Places To Visit In South India: A Traveler’s Guide 4 you